Thanksgiving Day, my family was gathering for the traditional feast. The golden-brown turkey sat, half-carved, surrounded by decimated side dishes of candied yams and mashed potatoes and gravy.

“A novel? Well, I’ll be darned. You wrote a whole book?” My uncle’s eyebrows rose when I nodded. The clink of silverware on plates quieted down.  “Wow! You’re gonna be the next J.K. Rowling!”

My cousin chimes in. “What’re you gonna do with all the money?”

“Yeah, I could really use some help.”

The most painful thing…

The accomplishment of writing a novel took the backseat on a very long bus. They asked what it was about and responded with a, “Huh. I don’t really read that.” I’d devoted hundreds of hours to it, but there was no way for them to understand that it was becoming a part of who I was in a way I didn’t even comprehend. But I felt it.

My family tried to be supportive in their own way by telling me I’d be as successful as J.K. Rowling (and they could really use the financial boost, too). But that also sets up the expectation that I’m no good unless I sell millions of copies. And I hadn’t even decided I wanted to be published.

And read it? That was a whole other mixed bag of emotions. Some wanted to read it, like my mom and gram. That made me so nervous. The mom in my novel was the villain. Yikes! And what if they hated it? What if it actually was terrible?

Most of my family didn’t want to read, which made me feel a whole different kind of lame. Like I wasn’t worth a few hours of their time.

The reality is, most people think that if you write a novel, the getting it published is easy. Even self-publishing, which is a much more direct path, takes editing, copy editing, dumping some money into a cover, and a part-time marketing job to sell a decent number of copies. A select few people know how difficult it is to take a manuscript and get it  across the Big-5 finish line. So digest comments about your writing while also keeping their blissful ignorance in mind. They probably don’t mean to hurt you. They most likely don’t realize they’re doing it. I know that over the years since this, my family has watched me struggle and improve and been supportive to the best of their ability. 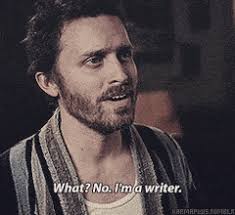 It takes a lot of courage and fortitude to even write a novel, and by the time you’re finished, it’s such a part of you. Having that be rejected and criticized and even just passed by can be a painful experience. But if you never share your novel, you’ll never find a whole other joy that comes from the writing process–the connection with your reader. And it’s worth it. You’ll find that people who read your books will gain things from it you never intended. They’ll have joy in an escape of your making.

You can share it with your family, let them read it, but don’t make them your critique partners. Your mom or gram or sister are most likely not going to give you the real critique you need. Find and connect with other writers out there who write in your genre and age category. It matters. And as you edit other people’s work, you’ll see an improvement in your own writing as well.

Or maybe you just want to write the first draft. Sometimes all we want is to give ourselves the escape. If that’s what writing is for you, you shouldn’t feel like you have to publish your novel. If you have a dream to be published, then go for it! I’ve gone back and forth over the years, not wanting to publish, wishing I could, hoping to go Big-5, thinking Independent presses would be a better way to go. Every one of those feelings and avenues is valid and should be respected.

And when you come out about your writing to people, give yourself a break, too. It’s okay to have all those feelings. Just don’t stew in them or let them get in the way of your dream.