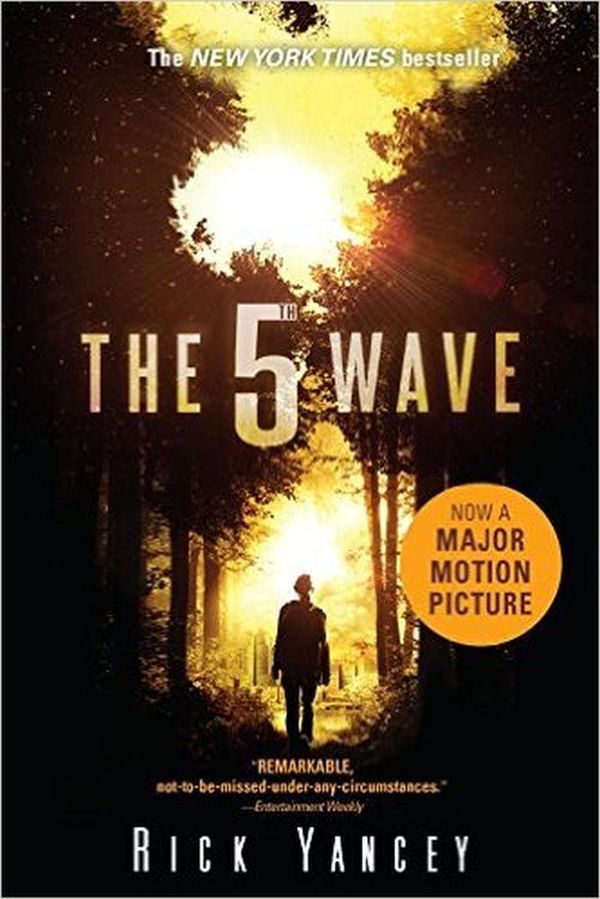 This book’s most impressive aspect for me was characterization. Even when I wondered here and there about certain aspects mentioned below, the characters were so compelling I couldn’t help myself. I did extra chores just so I could finish listening to the end on audible.

The challenge? Surviving the genocide of the human race when aliens attack Earth in the not-too-distant future.

Sixteen-year-old Cassie, her brother Sam and her dad survived the first four gruesome waves of the attack. Together, the three wait out the titular fifth in a military base for survivors until school buses arrive to take all children to safety, including her brother Sam. Cassie, her dad and the rest of the adults are then divested of their weapons and marched into a bunker by their protectors. Cassie escapes, only to see her dad (and everyone else) brutally executed by their so-called protectors. She then embarks on a mission to rescue her brother. As in his previous efforts (The Monstrumologist, 2009, etc.), Yancey excels in creating an alternative world informed by just enough logic and sociology to make it feel close enough to our own. The suspension-of-disbelief Kool-Aid he serves goes down so easy that every piece of the story—no matter how outlandish—makes perfect sense. The 500-plus-page novel surges forward full throttle with an intense, alarming tone full of danger, deceit and a touch of romance. The plot flips back and forth with so much action and so many expert twists that readers will constantly question whom they can trust and whom they can’t. Best of all, everything feels totally real, and that makes it all the more riveting.

Nothing short of amazing. (Science fiction. 14 & up)

From the very beginning, Yancey does an amazing job with his characters. Their decisions never felt like a plot device. Their emotions rang true.
The premise is unique in that the aliens (like The Host) look like the humans, which keeps us guessing as to who are the aliens and who are the humans, one of Cassie’s biggest problems. While the plot twists and turns were cool, I thought they were predictable. (I’ve been plotting way too much lately).
From Kirkus: “The suspension-of-disbelief Kool-Aid he serves goes down so easy that every piece of the story—no matter how outlandish—makes perfect sense.”
I did not find this true. There was a major flaw for me, which was why an alien race so advanced that they’ve been watching us for thousands of years has the capability of literally eliminating every single human, but they choose not to.
Nope. Wouldn’t happen.
Overall, this was an amazing read! I highly recommend it and hope the movie does it justice, though I keep expectations low these days.
I’ll be reading the next two in the series sometime in the near future.

Rick is the author of fifteen novels and a memoir. His books have been published in over thirty languages and have earned numerous accolades and awards from around the world. His young adult novel, The Extraordinary Adventures of Alfred Kropp, was named a “Best Book of the Year” by Publishers Weekly and was nominated for the Carnegie Medal. In 2010, Rick received a Michael L. Printz Honor for The Monstrumologist. The sequel, The Curse of the Wendigo, was a finalist for the Los Angeles Times Book Prize. His latest novel, The 5th Wave, the first in an epic sci-fi trilogy, made its worldwide debut in 2013, and will soon be a major motion picture for GK Films and Sony Pictures.

There’s a lot more about Rick Yancey on his website. Click here to go take a look!