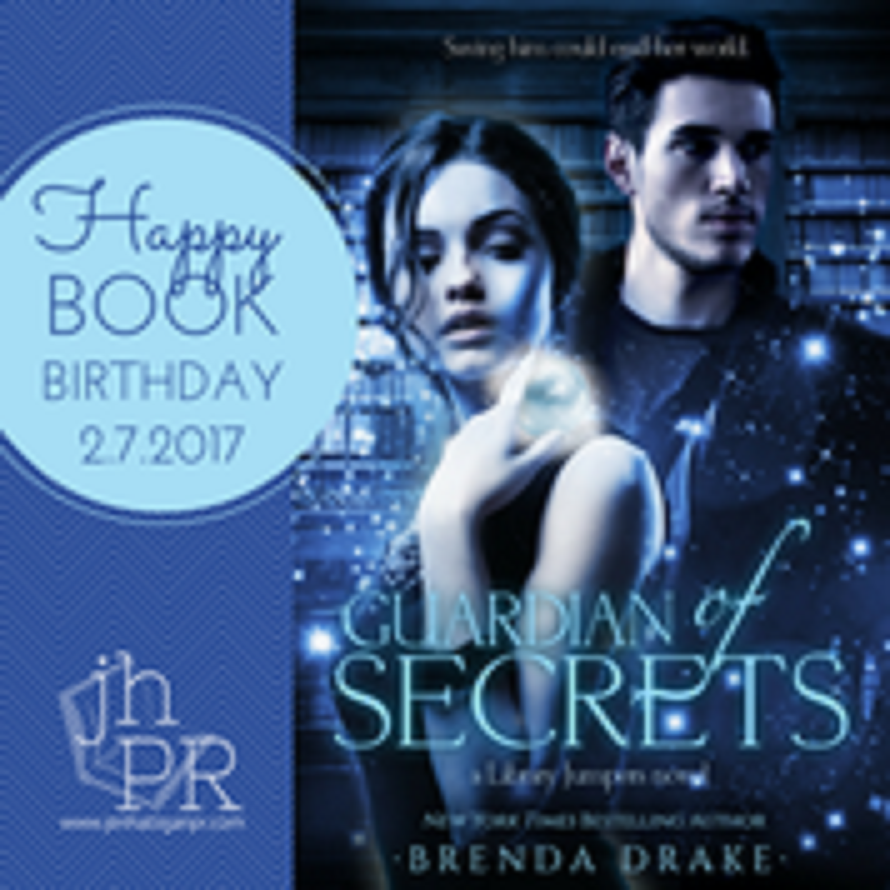 Today is the release of Brenda Drake’s GUARDIAN OF SECRETS (Library Jumpers #2)! Be sure to enter the giveaway via Rafflecopter below!

Being a Sentinel isn’t all fairytales and secret gardens. Sure, jumping through books into the world’s most beautiful libraries to protect humans from mystical creatures is awesome. No one knows that better than Gia Kearns, but she could do without the part where people are always trying to kill her. Oh, and the fact that Pop and her had to move away from her friends and life as she knew it. And if that isn’t enough, her boyfriend, Arik, is acting strangely. Like, maybe she should be calling him Dzex,dz since he’s so into another girl. But she doesn’t have time to be mad or even jealous, because someone has to save the world from the upcoming apocalypse, and it looks like that’s going to be Gia. Maybe. If she survives.

Magic and mayhem return to the world’s libraries in this YA sequel.

. . .  Drake’s (Thief of Lies, 2016, etc.) continued love affair with libraries, through Gia’s appreciation for their beauty and architecture, both grounds the worldbuilding and fills real libraries with a sense of potential wonder. With magical trials, political uprisings, strange beasts, monster-filled pocket dimensions, prophecies, and high school, the . . . the author manages to bring all the pieces together in a cliffhanger conclusion that should have readers eagerly awaiting the next installment.

A fantasy that embraces its love-triangle motif and deftly manages to create a believably fragile political system at risk of collapse—unless the heroine can save it.

Brenda Drake is a New York Times bestselling author of Thief of Lies (Library Jumpers #1), Guardian of Secrets (Library Jumpers #2), Touching Fate (Fated Series #1), and Cursing Fate (Fated Series #2). She grew up the youngest of three children, an Air Force brat, and the continual new kid at school. She hosts workshops and contests for writers such as Pitch Wars and Pitch Madness on her blog, and holds Twitter pitch parties on the hashtag, #PitMad. When she’s not writing or hanging out with her family, she haunts libraries, bookstores, and coffee shops, or reads someplace quiet and not at all exotic (much to her disappointment). Look for her upcoming novels, Thunderstruck, Seeking Fate (Fated Series #3), and Assassin of Truths (Library Jumpers #3) coming soon from Entangled Teen.